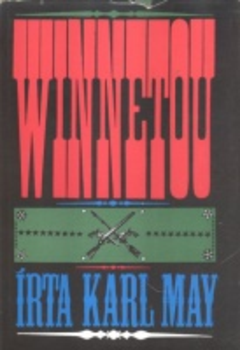 expected it, the drinking dragged on until Bancroft couldn't
even blabber. His boozing buddies had kept up with him and
were no less drunk than he was. There was no talk of going
for a ride. The fellows did what they had always done in their
state: they crawled behind the bushes to sleep it off

What now? It was high time for a messenger to be on his
way, however, those drunks were going to sleep way past
midday. It was best if I undertook the ride; but could I afford
to leave the camp? I was convinced that there was going to
be no talk of work during my four days' absence. While I
consulted Sam Hawkens about the matter, he pointed west
and said:

"Won't be necessary for you to ride, sir. You can give the
message to those two."

When I looked in the direction he indicated, I saw two
riders approach. They were Whites and in one of them I
recognized an old scout who had previously delivered
messages and progress reports from the next section. Next to
him rode a younger man. He wasn't dressed like a
frontiersman and I hadn,t seen him before. I walked towards
them; when we met, they halted their horses and the stranger
asked for my name. I gave it to him and he looked at me with
a friendly but searching gaze and said:

"Then you must be the young German who's doing all
the work here while the others sit around on their lazy
derrieres. You,ve undoubtedly heard of me, sir. My name3s
White."

He was the chief engineer of the next section where the
messenger was supposed to have been sent. There had to be a
good reason for Mr White,s personal visit. He dismounted,
shook my hand and then looked over the camp. When he
spotted the sleeping men behind the bushes and the whiskey
barrel, a knowing but not at all friendly smile crossed his
face.

"I guess they're drunk?" he asked.

"Yes. Mr Bancroft was heading off to your camp and
organized a small farewell drink. Fll wake him and. . ."

"Wait!" he cut me short. "Let them sleep! That gives me
the opportunity to talk to you without them overhearing us.
Let's leave them to it and walk to the side a short stretch!
Who are the three men who stood next to you just then?"

"Sam Hawkens, Will Parker and Dick Stone, our three
most reliable scouts."

"Ah, Hawkens, the short, peculiar hunter. Capable
fellow; Fve heard of him. Those three should come with us."

I followed his reguest and signalled them to join us, and
then enguired:

"You're coming in person, Mr White. Are you bringing
important news?"

"Nothing special, except that I wanted to check out the
situation here for myself and talk with you in particular.
We,ve completed our section, yours is not even close to
being finished."

"That's because of the difficult terrain, and I will. . ."

"I know, I know!" he cut in. "Unfortunately, I know
everything. Had you not made a threefold effort, Bancroft
mnnm etil] lm af nm efartínn nninf "