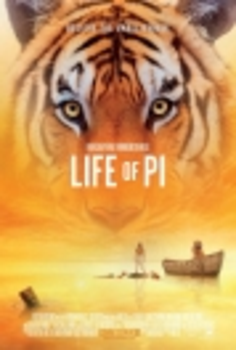 the hyena, Pi uses some of its flesh as bait to catch fish in order to gain more food for him as
well as the other animals. From biblical point of view, the dying zebra can be regarded as
some sort of eguivalent to "the lamb ofgod" crucified to redeem the world's sins.

The hyena (or in the second version the brute, ruthless French sailor who never sticks
at anything, including murder and cannibalism, in order to ensure his own survival) is on the
other hand an archetype of an enemy. It is not the only predator on the boat, and is actually
smaller and weaker the great Bengal tiger. However, there is an important behavioral
distinction between a tiger and a hyena, which makes the latter a better projection of
archetypically hostile character. While the feline creatures never express any sort of aggression
when hunting for their prey, canine beasts such as hyenas often display openly aggressive
behavior, which human mind automatically associates with hostiliry and danger. Also, tigers
are in many cultures (including the Indian one) revered or even deified as beautiful and
admirable creatures, while hyenas are often considered repulsive.

The orangutan female, nicknamed "Orange ]uice" by the Patel family is, I believe, the
personifrcation of the main protagonisfs anima — the archetypal woman figure, in this case
representing both gualities of a soul mate and a good mother. Pi regards Orange _]uice as a
beautiful, intelligent and sensitive creature and harbors deep affection to her, almost like a son
to his dear mother. Orange Juice is eventually killed by the hyena, after almost heroic,
admirable attempt to defend herself and Pi from the stronger carnivorous creature. l'ler death
is one of the key moments of the story, and can be regarded as a turning point in the life of Pi.

3
In the second version form the third part of the novel, the orangutan female is replaced with
Pils mother, who is brutally murdered by the beastly French Cook

The most important and complex animal character, however, is undoubtedly the tiger
— Richard Parker, which can be interpreted as a considerably complex symbol. He doesn't
have a human counterpart in the latter, "realistic" version of the narrative, which implies that
the tiger must be a part of Pi himself, as an aspect of his own psyche. From Freudian point of
view, Richard Parker could be regarded as a representation of Piscine's "id" — the instinctual
part of human mind driven by the animalisric principles. Therefore, the tiger is a sort of "devil
inside" (even Christian mythology sometimes refers to the Devil as "the [carnivorous] beast"),
who, however turns out to be indispensable for Pi)s survival. After all, there are other notable
works from Anglo-American literature which use a tiger as a symbol of great, vital, creative
(possibly even sexual) energy, such as William Saroyan's short story "Tracy's Tiger", or
William Blake's famous poem cluoted at the beginning of this essay.

Through the lens of Jungian archetypal literary criticism, the character of Richard
Parker can be viewed as the Mshadow" side of Pfs psyche. in this respect, the story of Life afPí
follows the archetype of initiation, in which the hero typically needs to identify and defeat or
control his shadow in order to win his ultimate guest.

In this case, Pi as the main protagonist manages to draw strength from the darkest
side of his personality in order to defeat his enemy represented by the hyena (alternately the
murderous sailor) and later on tame and control his instincts to survive the remaining months
of ordeal in the broad waters of Pacific Ocean. When Pi's lifeboat reaches the dry land, at the
moment of his heroic return into human society, the tiger immediately runs away and hides in
the dark Mexican forests, which — I believe - serve as a symbol of the deep, subconscious parts
of the protagonist's mind, never to see the light of consciousness again, as the mental
processes represented by the beast must stay repressed in the civilized society.

This society nevertheless rerains many innate features of old primeval communities
and their immortal legends, some of which lan Martell so masterfully paraphrases in this
novel about the survival of an archetypal hero, the sixteen-year-old Indian boy, Piscine
Molitor Patel.